“Have you ever seen one? (Trickster Cat)”

“Of course not. It would’ve eaten me if I had.”

It begins with a sort of psychic calamity befalls Japan. Then, everything is fast forwarded to a thousand year later. The scene now depicts a small, idyllic village with its signature pastoral landscape and serene atmosphere. It is still in Japan, but the future seems to have reverted back to pre-industrial age. Acting as a clear territorial border of the village is a holy barrier, whereas it’s strictly forbidden to cross or go beyond the limit. 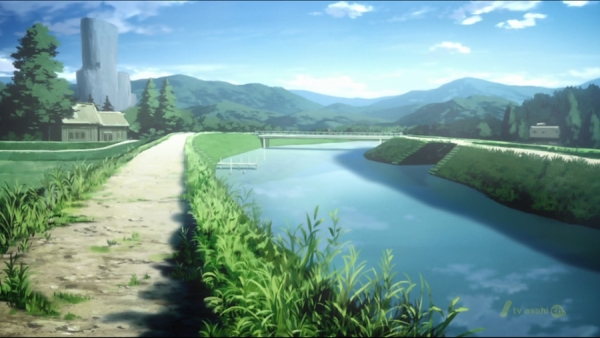 ¦The absolute limit, ominously ‘floating’ in the sky.¦

Saki Watanabe is an elementary student enrolled in ‘Harmony School’. One day she finally awakens her telekinetic power and is qualified to graduate. After that, she partakes in a ritual of adulthood and joins a new class called the ‘Unified Class’ in ‘Sage Academy’. There, she is reunited with her friends and starts taking unique lessons aimed to improve their practical abilities (telekinetic).

¦Saki, as the new student, attracting curious eyes from her brand new classmates.¦ 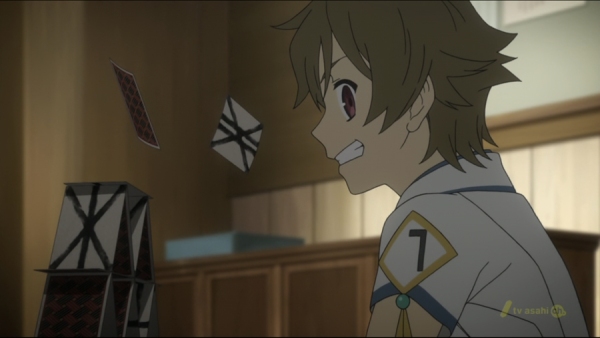 ¦Building a pyramid of cards purely with telekinetic power.¦

However, Saki’s new life doesn’t only bring joy as her anxiety begins to grow tremendously in the wake of several disturbing mysteries that are circulating as rumors. She is curious as to where the students of ‘Harmony School’ who fail to graduate disappear to. There’s also the Trickster Cat; an ominous, supernatural presence acting the role of a bogeyman that lurks about at sunset and is said to come after those who do not graduate from ‘Harmony School’. Her restlessness goes off the roof when she overheard her parents are panicking because their daughter claims to have seen the Trickster Cat.

The episode ends in a cliffhanger when Eriko, the student with the poorest performance in class, and also happens to be in the same group as Saki, goes missing the next day. 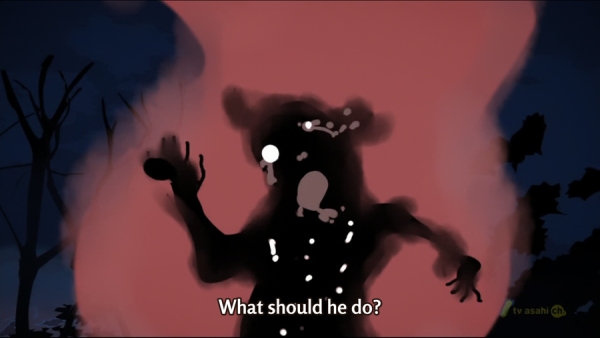 ¦A fiend: An abstract, absolutely scary supernatural existence depicted hanging around outside the holy barrier.¦

The opening scene, which is the said psychic calamity, is strongly etched in memory it’s quite memorable and unforgettable. We see boys apparently exercising bursts of immense telekinetic power in a gruesome fashion; people drop lifelessly as their bodies ripping open in a shower of blood. And the gory, yet very artistic sequence fades in and out of focus, as if revealing the spectator’s state of mind that’s being tortured by shocking confusion and disbelief. The calming, lulling soundtrack in contrast with the carnage also multiplies the scene’s impact in our heart.

¦The moment the door opens, blood will be spilled massively.¦

Being a work that’s based on the award-winning novel by Yusuke Kishi, “Shin Sekai Yori” is immensely intriguing, because it’s ridiculously rich in mystery, but actually gives very little away in its first episode. The whole rural life seems slow-paced, relaxed, and peaceful, but a chill sent down our spines instinctively tells us something is terribly wrong here.

The characters so far, the female lead Saki and her friends, still remain in their skeletal stereotypes and don’t come across as attention-grabbing-ones. However, the narrative of the story manages to at least glue us to sit in the fourteen-year-old casts’ positions, where we’re only privy to a tiny and artificially bright corner of a vast and pitch black, frightening reality. We end up empathizing with Saki’s growing curiosity, anxiety and sense of insecurity as questions begin to pile up.

The audio and visuals are also key components in successfully shaping the overall atmosphere to be menacing and creepy. The mix of traditional and element of fantasy produce uniquely attractive designs (the Unified Class’s interior design and their trademark uniform are creatively pleasant). 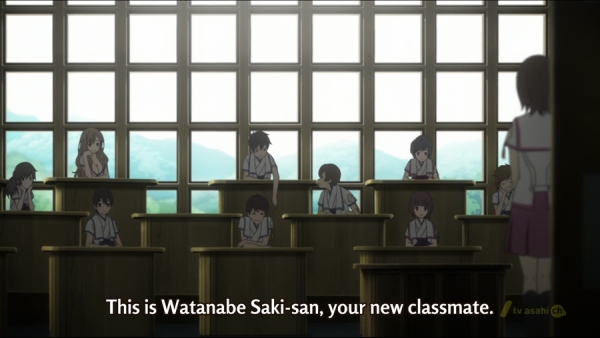 ¦An attractive class that befits of one located in the rural area.¦

¦A rather refreshing uniform design.¦

Rather than trying to be flashy or melodramatic, “Shin Sekai Yori” pulls in viewers with gentle but sinister fingers. The secretive horror emerges subtly, eerily, and with considerable force to disturb and invite strong curiosity. Its first episode makes a powerful start to what may be one of the season’s most gripping series.

The self-claimed irresistible, energetic life form has been enchanted by the wonder of Japanese culture (read: anime & manga) since he was able to stand on his own feet. Now he is looking forward to infect you with his love for Japan. Resistance is futile!
View all posts by Gilimandra →

People Currently Working on the Blog